Pathways to Technology - Communications Update on the Impact of COVID-19 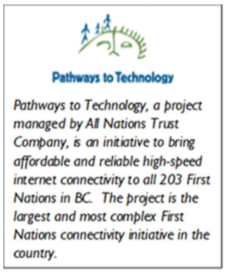 In the midst of COVID-19, access to high-speed internet is more critical than ever before. With the Province of British Columbia’s March 18 declaration of a state of emergency, K-12 in-classroom learning was suspended throughout BC, non-essential surgeries were cancelled, and doctors began providing appointments primarily online or over the phone. Correspondingly, the Province included internet and telecommunications in the list of services that must continue to be delivered during the pandemic, describing these services as “essential to preserving life, health, public safety and basic societal functioning.”1

Yet, in British Columbia, many First Nation Communities have substandard internet connectivity that falls far short of the CRTC’s current definition of high-speed (50 mbps down/10 mbps up). These First Nation communities are being denied the essential service of internet in that their poor connectivity precludes access to other essential services, such as online learning and health care.

Pathways to Technology’s original mandate in 2008 was to connect all 203 First Nations in British Columbia to high-speed internet. And, in spite of moving goal posts, (in particular an evolving understanding of what constitutes “high-speed”), Pathways has made incredible progress towards that goal. The Project is on target to achieve its original mandate by March 2021. 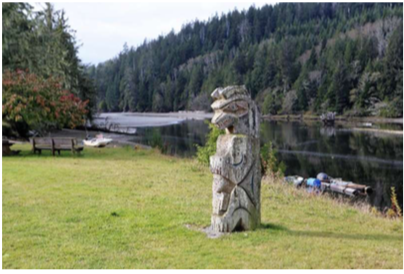 In spite of this achievement, much important work remains to be done. The scope of the original mandate was limited to connecting First Nation communities at the “seat of government”, meaning the community where each Nation’s main office is located. But many of British Columbia’s 203 First Nations have more than one community, with the result that approximately 60 additional communities, (each with more than ten homes), were excluded from the original mandate due to limited funding.

On top of this, certain communities that were connected during the early days of the Pathways Project have faced operational challenges such that they are now underserved. For communities that lie within the service areas of large carriers or internet service providers (ISPs) such as TELUS, Pathways funds the infrastructure builds and negotiates agreements that obligate these ISPs to perform ongoing maintenance and upgrades. In smaller and more remote communities that cannot feasibly be served by large ISPs, however, Pathways seeks alternate solutions involving either small carriers or, in some cases, First Nations acting as their own ISPs. 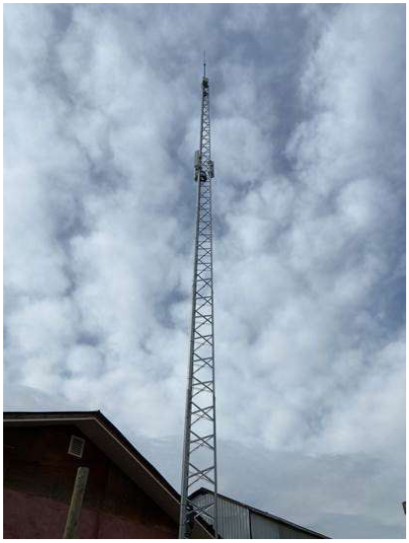 In these latter situations, First Nations manage their own ‘last mile’ networks and pay carriers for ‘transport’ to the community. First Nation-owned ISPs are then faced with the inherently conflicting goals of delivering affordable high-speed internet while also generating enough revenue to cover ongoing costs of transport, maintenance and upgrades. More often than not, cash flow is insufficient and, over time, networks degrade and speed and bandwidth fall below ever-increasing standards. A lack of available funding for ongoing operations has unfortunately led to this outcome in several of Pathways’ connected communities.

Correspondingly, in scenarios where large carriers act as the ISP and residents subscribe for high-speed internet from these ISPs, networks are sustainable, but affordability is a barrier.

In both scenarios, certain First Nation communities find themselves with no good option. Acting as the ISP enables the delivery of affordable high-speed internet, but can lead to network sustainability issues. Having a large carrier act as the ISP solves sustainability issues, but comes with affordability challenges. A further hurdle exists in both cases as many homes lack access to computers.

Pathways to Technology is looking ahead and working proactively on all of these issues: affordability, network sustainability, connectivity for small communities that were excluded from the original mandate, and lack of access to hardware.

The urgency of these challenges is magnified by COVID-19 and the now desperate need for essential services that can only be obtained online. In particular: education for First Nation youth.

Official guidance from the Ministry of Education acknowledges that many students in BC will have challenges working online, and indicates that school leaders are working on a variety of approaches to meet individual needs and situations.2 While this may be true, students with access to high-speed internet are already taking part in online learning, moving forward while students in First Nation communities are stalled, in limbo, as the educational divide grows apace with the digital one. A recent situation in Whispering Pines, BC is just one example of this. 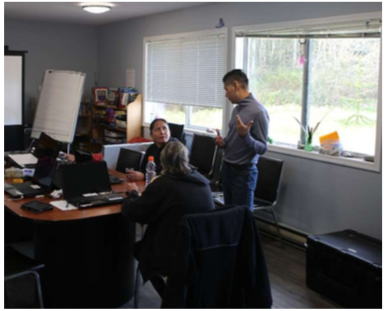 On March 22, 2020, Indigenous Services Canada (ISC) reached out to Pathways about a connectivity crisis in the small and isolated community of Whispering Pines, located about 40 km north of Kamloops. With the closure of schools and transition to online learning, six students in Whispering Pines faced falling behind at school because of poor connectivity in their community.

Pathways brought full connectivity to Whispering Pines using wireless technology in 2011. As its own ISP, however, the community had faced network sustainability issues with the result that internet speed and bandwidth were not sufficient for online learning.

Although the scope of Pathways’ mandate does not allow for retroactive maintenance or upgrades in previously connected communities, Pathways was able to assist Whispering Pines on an exception basis. When ISC reached out this March, Pathways acted immediately, worked with a local contractor and developed and implemented a plan to get Whispering Pines students online and back to learning. The plan included upgrading radio equipment at the tower site and installing new radios at each of the six households where students live. As of April 7, 2020, Whispering Pines students were online and catching up with their peers.

Pathways was able to achieve this result so quickly by drawing on its knowledge of the existing infrastructure and leveraging its relationship with the community to identify and then focus on Whispering Pines’ specific needs and priorities. Throughout BC, Pathways is closely tied to communities like Whispering Pines and the Pathways team has long term, on- the-ground experience developing collaborative solutions to deliver high-speed connectivity to First Nations.

Moving forward through the COVID-19 crisis, Pathways will continue striving towards its original mandate and beyond. The work will not be done until all First Nation communities in British Columbia have sustainable and affordable access to high-speed internet that can be relied upon in crises like the one we face today. Now, more than ever before, high speed internet is essential to the short- and long-term viability of First Nation communities.